In Budapest, bathing has been elevated to an art. To visit one of the grand spas of Budapest is to quite literally immerse yourself in culture. It is as fulfilling an experiece as you are likely to have in travel- architectural, historic, and- perhaps best of all- socio-cultural. Discover the art of bathing through the best Budapest Bath Experience.

The Art of Bathing: The Best Budapest Bath Experience

During the Belle Epoque, Budapest perfected the cafe as cultural institution. Essentially grand public living rooms, cafes like Gerbaud, Cafe Central, the New York Cafe- were centers for intellectual debate, the arts, socializing- all the refinements of society. This air of refinement extended to the baths- no  less social, nor- in many cases- less elegant.

My first bath in Budapest – more of a pilgrimage – introduced me to both the opulance and the conviviality of the classic bathing experience. Staying at the Gellert (anyone who is at all serious about their spa holiday will want to stay at the Gellert), I could just slip into my suit, robe, and bath shoes and pad though the grand corridors to a hall that looked much more like a museum than spa. 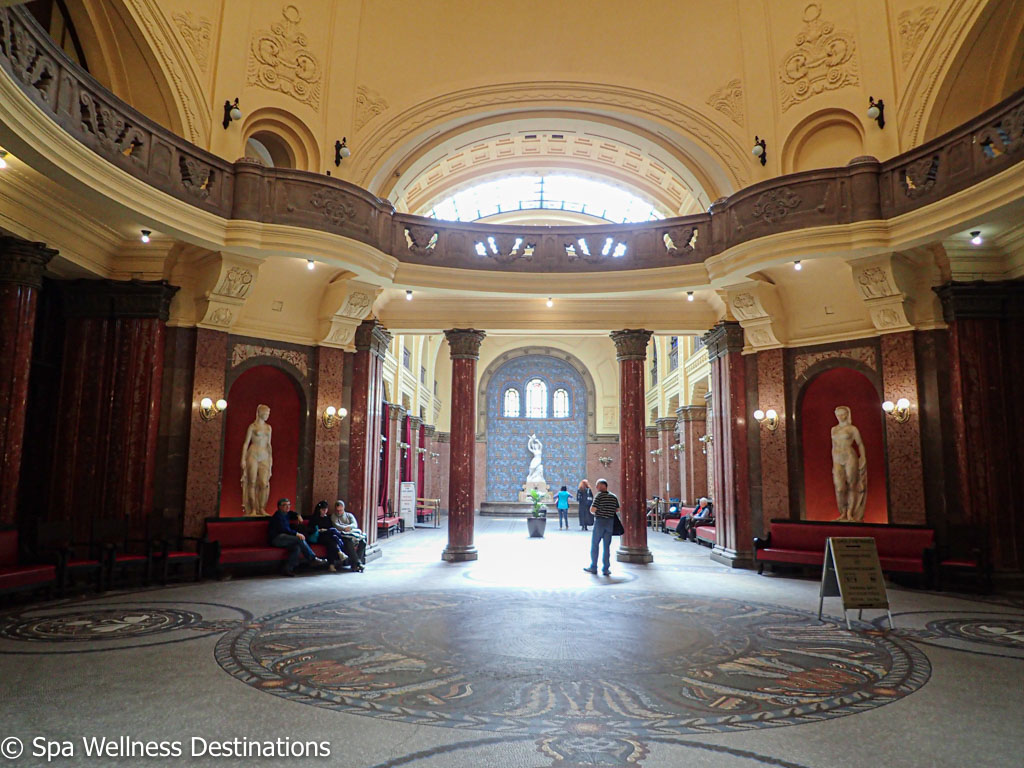 It was not yet 7 am, just barely dawn. I wanted to experience the famed Art Nouveau style in its most naked state, in the day’s quietest hours. To see it like this, apparently you must get there at 6- when the spa opens- for by the time I arrived, a group of 7 or 8 elderly gentlmen had already arranged themsleves on the stairs, partially submerged in the waters of the 35 degree pool. Over the course of the next hour, others came in, some with their newpapers that they held just above the surface of the pool. The therapeutic waters serve as their cafe. I enjoyed their conversation (Hungarian is a delight to the ear) from the solitude of the 40 degree pool on the other side of the room.

Budapest is bathed in an abundnace of therpautic thermal  springs- over 100 of them. When the Ottomans took the city (1541 – 1699), they wasted no time developing this natural asset, building baths reminiscent of Istanbul’s, like the Çemberlitaş. The difference here, instead of marble platforms under the domes for people to recline in the steam, they built pools to fill with the waters- a central large pool, and several surrounding pools of varying teperatures. Baths of this first era are still in use- the Kiraly, the Rudas, the Veli Bej. 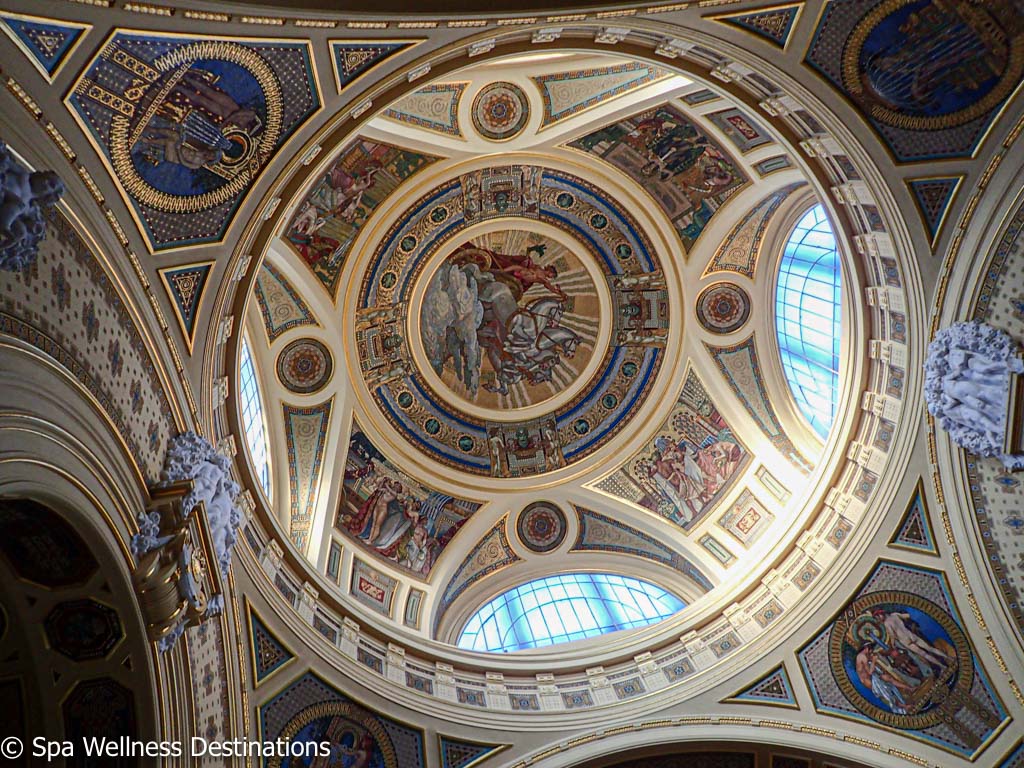 The second wave of baths came during the Belle Epoque. Thanks to the Austro-Hungarian Compromise of 1867 and the dual monarchy (the King of Hungary and Emporer of Austria were one), Hungary was no longer under Austian control. This coincided with the founding of the city itself- Buda, Obuda, and Pest merged in 1873. A period of monumental building that defined the city’s identity followed- not just the Parliament Building and the Fisherman’s Bastion- but also the baths. In the early 20th century, palaces of health like the Szechenyi and Gellert became central to the city’s cultural identity.

The city’s oldest baths are deeply atmospheric- truly like slipping into the waters of centuries past. All of the character of their Turkish counterparts is in place- the rough stone, the high domes with their tiny skylights adding an eastern air of mystery and romance. In tha case of the Kiraly, for instance, the organic additions over the years add an unpretentious sense of functionality (the changing area and massage rooms will remind you of the baths in the basement of Wes Anderson’s Grand Budapest Hotel.) This is not a a tourist site, but a functioning therapeutic bath with authenticity and character.

The early 20th century spas are palaces of splendor. At the heart of the Varosliget- Budapest’s elegant city park (the famous restaurant gundel is here, and so are two of the city’s museums)- are the Szechenyi baths, built in 1913 and expanded in 1927. Use the main entrance to get the full effect. The cuppola-crowned building is vast and baroquely ornate- far too grand to reasonably be a spa.

Artifacts of nostalgic elegance, like the mirrored signs, date from the bath’s opening days. 13 splendid thermal pools await you inside. Outdoors, three enormous, elaborate swimming pools are surrounded by italianate structures in deep yellow, colonnades and statuary throughout. The mood out here is more pleasure garden than spa, but the pleasures are civilized- the older getlemen palying chess in the steaming waters as snow falls is one of the city’s defining images.

Just three years later, in 1918, the elegant Sezecession style Gellert baths opened. The grandeur of the entrance hall with its high domes of stained glass will lead you to think you have taken a wrong turn and are at a museum, maybe a palace. Well, it is a little of both- a monument to civilization and health. The glass roofed swimming hall, with its enormous pool surrounded by a colonnade, is almost surreal. But the star here are the thermal baths- it is one thing to be in a beautiful building, and quite another to undress (almost) and float in it. Covered in tiles rich in sculptural detail (of the famous Szolnay factory), its fountains now enhanced by 100 years’ of mineral deposits, it is overwhelming- like bathing in a jewel box.

Wellness, in every possible sense of the word:

The waters of Budapest are famously healing- detailed information is available on their various compositions and properties- baths are fed by different springs. Spa therapies are reularly prescribed as part of Hungary’s health system. But perhaps their most healing property of all is the profound sense of well being the grand spas of Budapest impart. An experience unchanged for decades, even centuries, is like a vacation from the 21st century, with the beauty of the surroundings adding to the pleasure. Spa culture is an integral, defining aspect of Budapest, where health, pleasure, and conviviality meet – surely, the very definition of wellness. 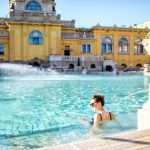 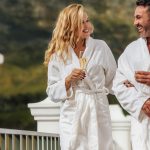 How to Spa at Home